Translation: ACSP (If you find any mistake please write to comunicaciones@acsp.cl)

The Italian National Agency for New Technologies (ENEA) leads a multidisciplinary consortium of nine European partners whose objective is to develop a prototype of high temperature solid oxide electrolysis (SOE). ENEA and the Fondazione Bruno Kessler (FBK), will model this prototype in collaboration with the Imdea Energía Institute of Madrid and the Swiss research institute EPFL. Capital Energy will be in charge of installing and operating it in one of its photovoltaic installations. The project – called Prometheus – has a financing of 2.5 million euros from the public-private platform Fuel Cells and Hydrogen Joint Undertaking.

The Spanish company Capital Energy and the Imdea Energía Institute (promoted by the Government of the Autonomous Community of Madrid) are the two Spanish partners that are going to participate in the European project Prometeo, lasting three and a half years and whose objective is to develop ” an innovative prototype of high temperature solid oxide electrolysis (SOE) that uses heat and solar energy to produce green hydrogen continuously “(green hydrogen is that produced with water as a raw material and electricity of renewable origin as the only energy used in the H2 production process). ENEA, the Italian National Agency for New Technologies, Energy and Sustainable Economic Development, will be in charge of directing the multidisciplinary consortium of nine European partners that will develop this project. Within the framework of the same, Capital Energy will be in charge of installing and operating the prototype designed during the project in one of its photovoltaic installations, while the Imdea Energía Institute will model the prototype and will be in charge of its integration with renewable energy sources. in collaboration with ENEA itself, the Fondazione Bruno Kessler (FBK) and the Swiss research institute EPFL.

Green hydrogen -explains Capital Energy- can be a promising solution to decarbonize several industrial sectors, since it is an energy vector produced from water and electricity from renewable energy sources (for example, solar, wind and hydroelectric). The green hydrogen production process does not generate carbon dioxide emissions (the only “waste” or by-product resulting from this process is water vapor).

Capital Energy reviews project details
The European project Prometheus proposes “an innovative system based on high-temperature electrolysis [breakdown of the water molecule -H2O- into oxygen and hydrogen] for the production of green hydrogen.” The prototype -explain from Capital Energy- aims to make the most of the heat and energy generated from renewable sources and, specifically, from solar energy, to optimize the production of green hydrogen “.

Prometheus wants to build a 25 kWe electrolyzer prototype capable of producing 15 kilograms of hydrogen per day. This prototype will be modular, with the potential to be replicated on an industrial megawatt (MWe) scale, and will combine renewable heat and electricity to perform “continuous high-temperature electrolysis.”

The challenge is to produce green hydrogen even when direct renewable energy is not available (or when its use is cheaper, as in the case of surplus production). The project will require an innovative system “to manage the energy production and regeneration phases, minimizing the withdrawal of electricity from the distribution network and optimizing self-production from renewables when solar energy is not available.” 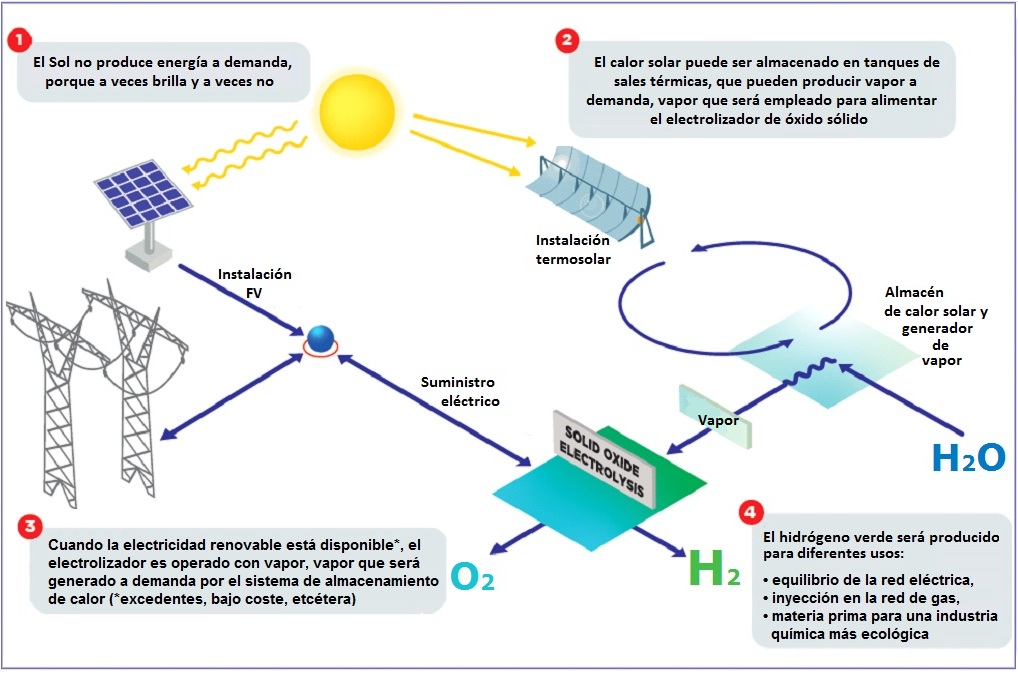 Finances the Fuel Cells and Hydrogen Joint Undertaking platform; coordinates ENEA
“The ambitious challenge and the innovative nature of the system -explain from Capital Energy- convinced the European Union to finance the Prometheus project with an endowment of 2.5 million euros contributed by the public-private platform Fuel Cells and Hydrogen Joint Undertaking ( FCH JU) “. To achieve the objectives, the project is led by a multidisciplinary consortium of European partners from the research and industrial sectors.

Coordinated by ENEA, the Italian-Swiss SME SolidPower will supply the solid oxide electrolyzers and the thermoregulation system; the Fondazione Bruno Kessler (FBK) and ENEA itself, in collaboration with the Imdea Energía institute and the Swiss research institute EPFL, will model the prototype and its integration with renewable energy sources; and engineering and prototyping will be carried out by the Italian company NextChem.

Potential end-users will also play a key role in the project, as they will lead R&D activities to satisfy end-user applications: Snam (Italy) will contribute to equip Prometheus for the injection of green hydrogen into the gas network ; Capital Energy will provide information for use in the chemical storage of renewable electricity and Stamicarbon (Netherlands) will support development activities for the use of green hydrogen in chemical industries such as ammonia and fertilizer production.

Beatriz Ruiz, director of New energy businesses at Capital Energy: “the project will allow progress in the development of versatile green hydrogen generation technologies that contribute to the integration of renewable energies and the decarbonization of sectors such as energy and industrial, as well as well as the development of energy storage. In addition, it will improve the management of renewable generation assets, providing them with flexibility, improving the stability and quality of the electrical network through the response that can be provided with this technology and allowing to manage moments of high network congestion ”

Manuel Romero, deputy director of the Imdea Energía institute: “in the case of high temperature electrolysis, it will be essential to achieve optimal integration of the renewable, thermal and electrical energy source, as well as the storage and recovery systems of residual energy. We hope that Prometheus will allow us to demonstrate a highly efficient integrated scheme in the production of green hydrogen ”

What is Capital Energy
Capital Energy, which presents itself as an energy company whose vocation is “to become the first 100% vertically integrated renewable operator on the Iberian Peninsula”, declares, in Spain and Portugal, “a portfolio of wind and solar projects that is around 38 gigawatts (GW) of power, of which more than 8.5 GW already have the network access permits granted “.

Thanks to the launch of its marketer, in the last quarter of 2020, Capital Energy has completed its strategic objective of being present throughout the entire renewable generation value chain: from promotion, an area in which the company has a trajectory of almost 20 years (it was founded in 2002), until the construction, production, storage, operation and supply.

The company, which declares as its objective “to bring to the final consumer the 100% renewable energy that it is already producing in its own facilities”, has fourteen offices in Spain and Portugal and a staff that “has gone from 30 people to more than 350 in the last three years. ”

What is the Imdea Energía institute
Imdea Energía was created by the Regional Government of the Community of Madrid in 2006 as a non-profit Foundation “in order to promote and carry out R + D + i activities that contribute to the development of a sustainable and decarbonized energy system”. The institute declares itself “strongly committed to the effective transfer of R&D results to the productive sector.” Imdea Energía offers its services to private companies, universities and national and international research and technology centers.

About Fuel Cells and Hydrogen Joint Undertaking
Fuel Cells and Hydrogen Joint Undertaking is a public-private partnership that has been supporting research, technological development and demonstration (RTD) activities in hydrogen and fuel cell power technologies in Europe since 2008. Its objective is to “accelerate the introduction into the market of these technologies, realizing their potential as an instrument to achieve a clean energy system in carbon “.

The three members of the FCH joint venture are the European Commission, the hydrogen and fuel cell industries represented by Hydrogen Europe and the research community represented by Hydrogen Europe Research. The successor joint venture, the Green Hydrogen Partnership, will build on the work of the Fuel Cells and Hydrogen Joint Undertaking to accelerate the development and deployment of a European value chain for clean hydrogen technologies.