The incorporation of women in the energy industry has increased in recent years, and the Concentrated Solar Power sector is no stranger to this reality. There they have acquired leading roles and day by day they work to achieve greater gender equality within their organizations.

In the commemoration of International Women’s Day, we talked with some representatives of the sector, who gave us their vision about the challenges of the Concentrated Solar Power in Chile and the importance that more women choose to develop professionally in renewable energies. 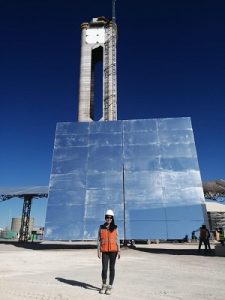 María José López, director of corporate affairs at Cerro Dominador, partner and founder of the ACSP: “We do not see sustainability possible without addressing social issues, such as gender equality or the gender approach.”

Cerro Dominador is the first solar thermal tower plant in Chile, located in the María Elena commune, Antofagasta region, one of the sectors with the highest level of solar radiation in the world. The project has an installed capacity of 210 MW, 110 CSP plus 100 MW of photovoltaic.

It is considered a pioneer in the possibility of generating solar energy 24 hours a day and provides a series of attributes to the national energy matrix, relevant qualities in a country that is leaving behind the generation of energy based on coal and other fossil fuels such as gas and diesel. However, this company has other characteristics that make it stand out in the industry. It is currently developing the implementation of a program that allows attracting more women to this industry.

In this regard, María José López, director of corporate affairs, assured that “we are executing a plan called “Energía + Mujer” (Energy plus women), which is an initiative of the Ministry of Energy and from Cerro Dominador, company that belongs to the investment fund EIG Global Energy Partners, which has among its commitments and characteristics the issue of equity and increasing it within the organization through different processes, such as, for example, selection: resumes are in a certain way blind, that is, they do not say genres”.

When she is asked about the recruitment processes, she pointed out that “we are encouraging applications for women to apply, which has allowed us to significantly increase their number. The shortlists of the organization, in almost all there have been women”.

She added that “the energy industry is very masculinized, so sometimes reaching these figures becomes complex. Another achievement that makes us proud is to bring these issues of gender focus to the chain of contractors, for example, those who are in operation and maintenance, many of them are workers from the María Elena community. We do not see sustainability possible without addressing social issues such as gender equality or the gender approach”.

Regarding the role that women have in the CSP industry, she stated that “the renewable energy industry in general and those that are coming now, the 2.0, including CSP, the role of women is key. I see them more interested in participating in an industry with these characteristics that are more flexible, more innovative and that have a more evident contribution to the planet than in the past in other energy industries, therefore, I think it is a synergy, a perfect collaboration. I think that more women are necessary for this energy transition towards more renewable energy and towards more renewable energy 2.0, which we have been talking about all the time.”

“It is an industry that one can dream a lot about, and I think the message is that women dream, innovate and dare with possibilities that perhaps they had not considered before, but above all that they dream and dare, that they will surely be able to do it”, concluded María José López.

María Teresa Cerda, deputy director of Fraunhofer Chile Research and leader of the solar thermal area: “we care more about each other than about ourselves, it may be cultural or historical, but we like to help, that everyone is well, that is why we are interested in renewable energies”

Fraunhofer Chile Research since 2010 has been dedicated to applied research to meet the needs of industry and accelerate energy in Chile and Latin America. One of his areas of work is Concentrating Solar Power, and it is also a founding member of the ACSP.

María Teresa Cerda, deputy director of this center, told us about the prospects for research in this field that “rather than providing services, what we have to do is develop this technology; with the irradiation we have, we could do much more research and have much more advanced human capital, that’s kind of what we should aim for. The big companies try to improve the operation, lower costs, so that more plants can be built, which is the same thing that Fraunhofer Chile is aiming to promote, support the industry, so that we can have more plants in Chile”

There are a lot of women in science, but there are not as many women in research, and they are even rarer in the CSP industry. According to María Teresa Cerda, deputy director of Fraunhofer Chile Research and leader of the solar thermal area, “in science there are fewer women than in engineering, I don’t know why this is the case, science has been left a bit for men, but there are, they exist”.

“The truth is that there are few of us, in fact I am a bit of a freak, because I studied physics, I am not an engineer, I have seen more people in energy who come from the world of engineering. I am as a grassroots scientist, not so much from the field of application”, she pointed out.

Regarding the reality inside this research center, the deputy director of Fraunhofer Chile stated that “we are promoting a gender policy, we have been with a work table for a year, talking about how we can attract more women to research and development (R&D). It is not easy, there are few and they are good, but they want to go elsewhere, perhaps towards a more applied engineering or as more traditional ones, not so much research. We want to attract them, be able to teach them and develop them and thus achieve more women, because in the end it is not a matter of equity or that we are 50/50, but because they contribute something to this work that men do not. It is not to differentiate, but women in general, we are very good at teamwork, they are proactive, they have many things, which they contribute to a multidisciplinary group”.

In her opinion, women are a contribution to CSP research, since “I feel that, in general, we dream of a better world, we like to contribute to the community, we are more than giving, and hopefully our work build a better world. It is something that particularly strikes me, I think that for many it is like that, of being able to achieve the common good for all, that we can continue to have energy, but in a way that is sustainable over time and that is not polluting or damaging to the community. It is something that we have in an intrinsic way, we care more about the other than about ourselves, it can be cultural and historical, but we like to help, we like everyone to be well, that is why we are interested in renewable energies”. 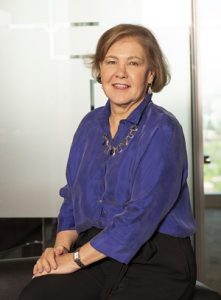 Blanca Palumbo Ossa, Counselor of the Board of Directors of the National Electrical Coordinator (CEN): “The programs that the CSP has developed to identify inclusion problems and establish good practices in terms of gender equality, are an example in the energy industry”

In accordance with the provisions of the National Energy Policy, by 2035, 60% of the energy produced in Chile should come from Non-Conventional Renewable Energies, and at this point CSP is seen as a great alternative to achieve this goal. In this regard, Blanca Palumbo Ossa, member of the Board of Directors of the National Electrical Coordinator, stated that “the goal, although ambitious, is fully feasible to achieve, since Chile has enormous potential in terms of Renewable Energies, which allow rapid progress in the way to reduce our greenhouse gas emissions. In this sense, the concentrating solar power represents an innovative technology that will undoubtedly allow us to diversify our electrical matrix and advance towards the goal of carbon neutrality”.

According to Blanca Palumbo Ossa, the energy industry continues to be quite “masculinized”, and she considers it important that more women join companies every day, since “it is known that we bring differentiating elements to our work, such as good management of teams, inclusive leadership, crisis management, innovation, sensitivity, among other aspects”.

Blanca Palumbo Ossa mentioned the gender equality actions carried out within the CEN, mentioning that “we have a Diversity and Inclusion Policy with Gender Equality that was launched at the beginning of 2020. This Policy became into a strategy, which is currently under development and that is implemented by a Diversity and Inclusion Committee with Gender Equity. This initiative has allowed us to increase the female presence in the Coordinator from 14% before the Policy to 21% today, review the position profiles to facilitate female recruitment, and try to include a woman in each selection list of personal. The base of women in leadership positions within the organization has also increased, and today they represent more than 30% of the managers.”

Regarding the incorporation of women in CSPs, she highlighted that “according to what we understand, in the Chilean Concentrated Solar Power industry, women have a greater participation than in the energy sector in general. I believe that the programs that this industry has developed to identify inclusion problems and establish good practices in terms of gender equality have been very relevant. These programs are an example for the industry, which I wish we could all replicate. I am referring, to cite a couple of cases, to the hiring of women in the construction of plants and to female participation in general”.