Namibia Readies Bidding for CSP in 2022 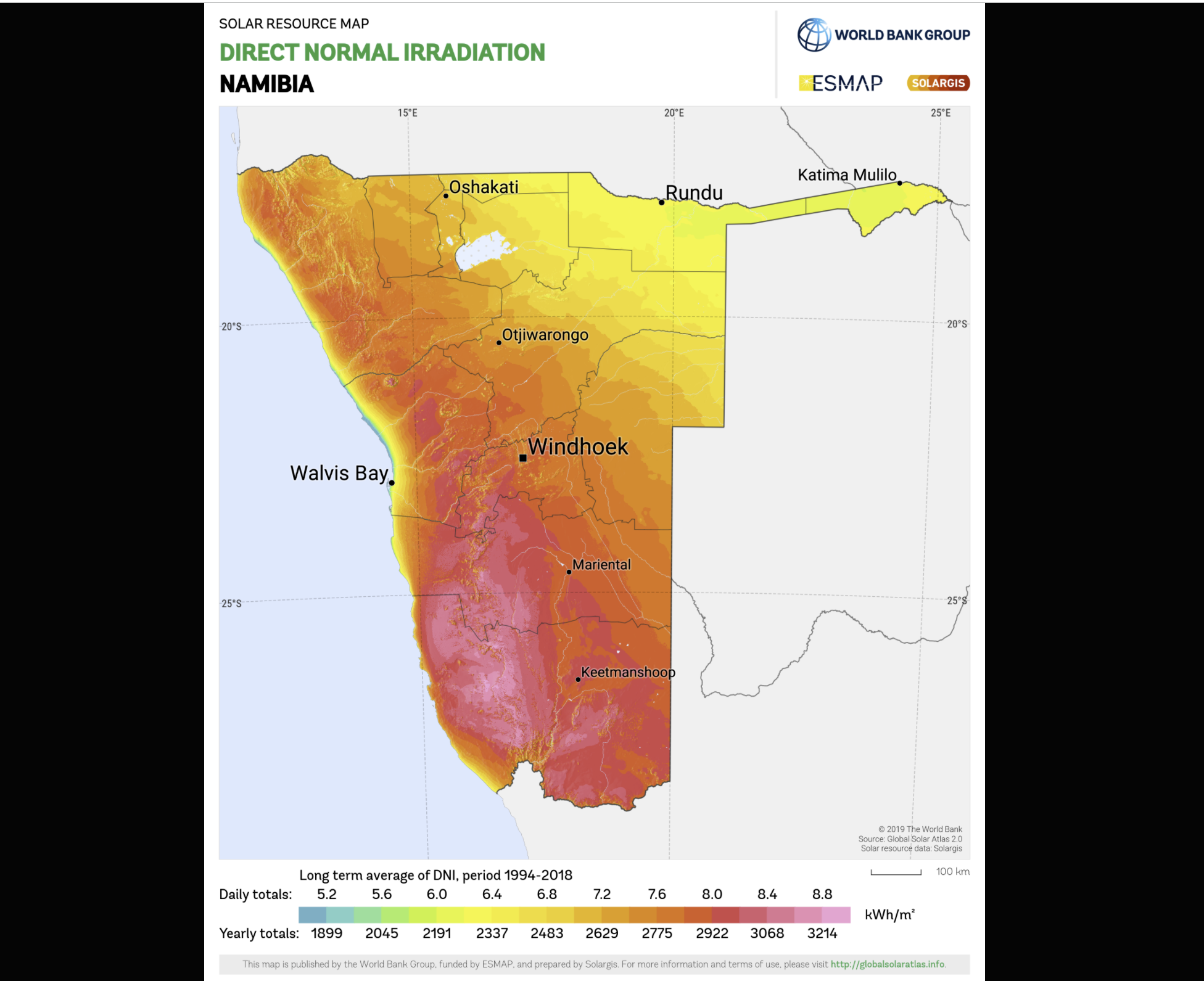 At the 2021 SolarPACES Conference, NamPower generation projects head Grant Muller laid out the national power company’s now finalized plans for a CSP project in Namibia, for between 50 MW and 130 MW, with storage. After 4 years of preparations, it is ready for its first CSP auction in 2022.

The small African nation has some of the best solar resource in the world with DNI ranging up to 3214 kWh per square meter annually (3,214 kWh/m2a)

Namibia’s current installed capacity for its population of 2.5 million totals 680 MW. Nearly all of this (517 MW) is supplied by renewables (hydropower, solar PV and wind) but a small percentage is still supplied by coal (122 MW) and it currently also receives power from neighboring South Africa’s coal-heavy grid. Its objectives are to lessen dependence on imports and coal, and increase resilience in its renewable grid.

NamPower is agnostic on the core CSP technology, except that it must be dry cooled. The expected timeline for the winning bidder is completion in 2025. The expected expenditure would be between $600 million to $1 billion US dollars.

Muller told conference attendees that NamPower envisions a “build, own, operate, transfer” plan that would transfer to NamPower during the running period of 25 years, procured through a public-private partnership process under Namibia’s new Public Private Partnership Act. Muller is hoping the expected tariff would be below 8 cents/kWh (USD) but this would depend on size and storage and dispatch times. No subsidies are planned.

He noted that ideally, the CSP project should be designed to target peak times of need to provide the best complementarity to daytime solar PV, and during hydropower’s dry season, which is from April to October, in the Southern hemisphere winter. So the addition of a second dispatchable renewable in addition to the hydropower, would best round out a renewable grid system.

He described the envisaged policy design as a hybrid between the very successful MASEN model in Morocco, and the REIPPP model in South Africa. Like MASEN, the development is de-risked by NamPower. which has already located several sites with excellent solar resource and over a three year period has measured the DNI using satellite and ground measurement data. By thus reducing development costs Muller expects to reduce the energy price paid by the consumer.

Unlike MASEN, the developer will arrange their financing. Like the REIPPP, there is a requirement for local content, which can be fulfilled by labor for earthworks, cement construction, and transportation, in addition to some socioeconomic development. The developer is also responsible for construction, operation and maintenance of the power lines.

NamPower’s role in the project now will be to procure the successful bidder and developer under the PPP Act and to support the winner in obtaining the required approvals clearances and permits for developing a project, to provide a developed and permitted project site, to off take the power produced and to oversee the project compliance to performance and contractual obligations. During the feasibility assessment, electricity demand, also the latest technology trends, the project risks, and a contingent liabilities will be assessed to form the final project objectives and risk allocation.

Given that the plant will be providing dispatchable energy, NamPower will require the performance of the plants be guaranteed by the developer in exchange for unavailability or capacity payments where NamPower is intended to be the anchor off-taker for the project.

Following the appointment of a Transaction Advisor, the next step is to set up the RFP for 2022, Muller said.